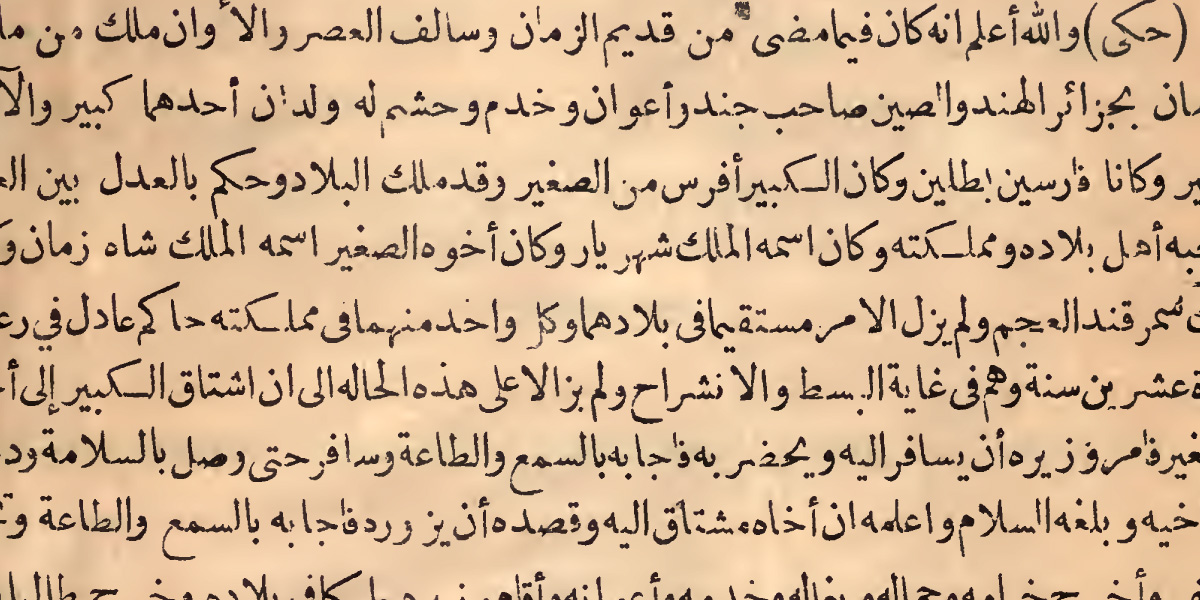 Every now and then in my ‘stray observations’ and elsewhere I pick out a word or a phrase and compare Malcolm Lyons’ 2010 translation to that of Richard Burton’s 1856 version. And a few weeks ago I also made reference to the original Arabic text.

The Burton translation is formally titled The Book of a Thousand Nights and a Night and is available in several versions on archive.org. There are ten volumes: I, II, III, IV, V, VI, VII, VIII, IX and X. Within these books are also contained Burton’s footnotes and supplementary essays.

Beware, though: one of the most prominent editions that appears on the archive.org search results is a 1894 edition published by H.S. Nichols & Co that was ‘edited’ by Leonard C. Smithers. There is a scribbled note on the frontispiece for Volume I warning ‘this edition has been censored’. How, I know not, so your mileage may vary.

The Gutenberg Project also has volumes of Burton’s original publication. These are not available as PDFs but can be read as HTML or as eBooks. Visit the pages for volume I, II, III, IV, V, VI, VII, VIII, IX and X. Weirdly, at the time of writing the titles for each page give the volume number with the words ‘out of 17’ but volume X contains the thousand-and-first night, conclusions and supplements.

The Malcolm Lyons translation that I am reading and recapping (Penguin Classics, 2010) is titled The Arabian Nights: Tales of 1,001 Nights and still very much in copyright! You can mail order or download via Amazon (volume I, II and III). But why not order it from an independent bookshop instead?

There are Arabic versions online too. The Calcutta II text, which is the source for both Burton and Lyons, is available on archive.org, where you can download volumes I, II, III and IV in PDF and other formats.

The archive.org site also has a copy of the Bulaq text, which has far fewer nights and stories than Calcutta II, but some intriguing illustrations—some of which I have used to illustrate my recaps. You can download volume I, II, III and IV or just read them online.